The observatory was established on the top of a nine stony Xavier Block for Science and Research in the year 2004, when the College was celebrating 125th year of its existence. A dome observatory, with 8 inch azimuth mount SCHMIDT - CASSEGRAIN telescope, placed inside it is functional after renovation at St Aloysius College, Mangalore.

The observatory served the students and general public of Mangalore to view astronomical events and terrestrial objects, withstanding heavy monsoon rain and summer heat of Mangalore. The College authorities have renovated the dome of the observatory and it is now fully functional. 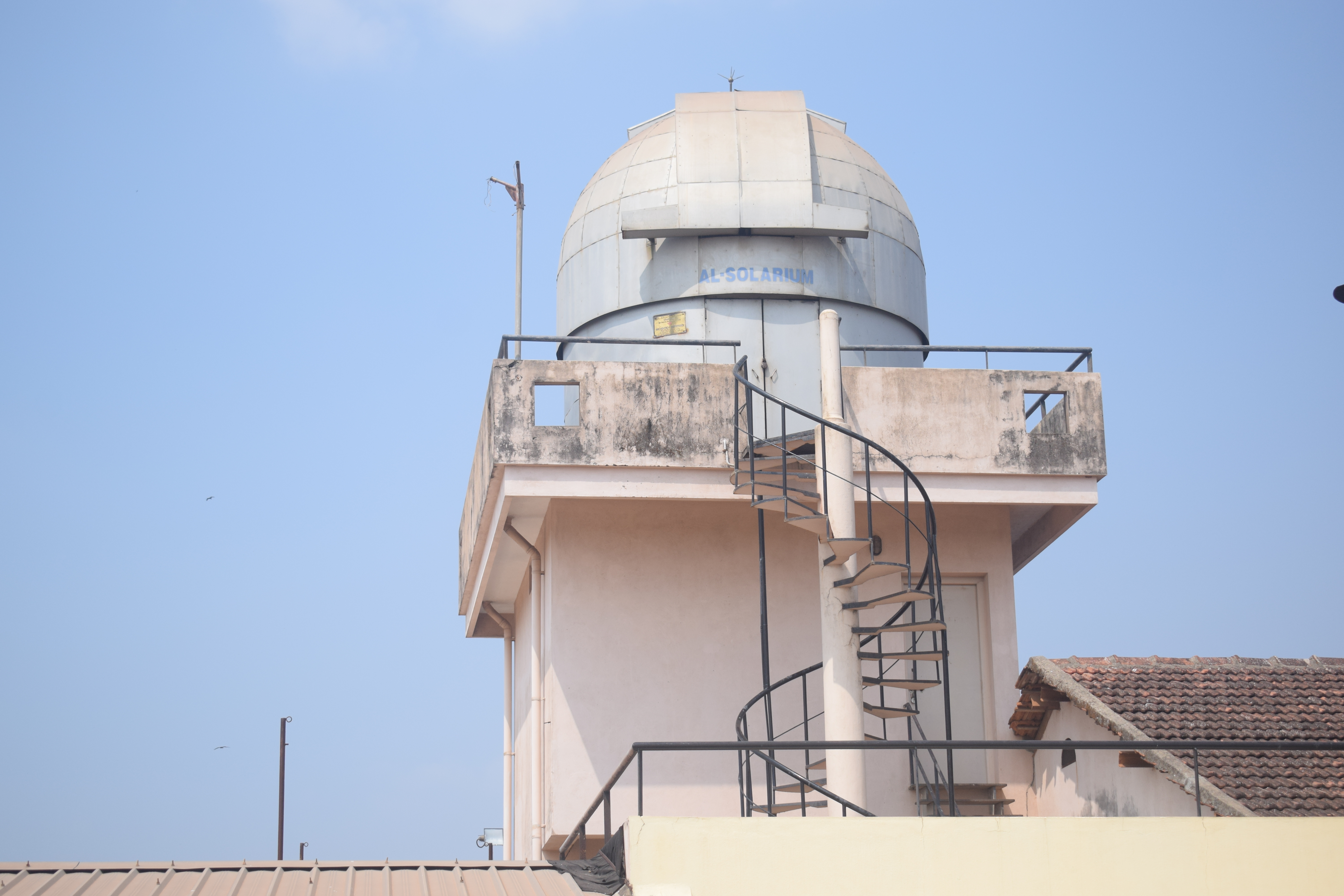 Need of observatory
The Sky on a clear day is an expanse of monotonous blue, may be with few whiffs of cloud. As day light fades into dusk and then into night, the beauty of the star studded sky reveals itself in its full glory. Observatory will provide an opportunity to appreciate this beauty.

Unfortunately the sky in our cities has become so polluted with smoke and dust from vehicles, industry and light from electric illumination etc that at times even brightest stars are difficult to spot except when there is a blackout due to a power failure. By the help of dome observatories it is easy to identify and spot the astronomical objects in a specified time, because observatories provide total darkness inside and a slit opening to look into the deep sky.

There are few advantages to a dome compared to other types of personal observatories.

Telescope:
Telescope is an instrument through which we can see fine details of distant objects. In 16th century, Galileo Galili discovered the first telescope. Sir Isaac Newton invented the first reflecting telescope in 1671. There are basically two types of telescopes,

The refractor telescope is what everyone recognizes as a telescope. It has a lens called the objective at the front and an eyepiece at the eye end. As the diameter of the objective increases, more light is transmitted and more detail is observed.
Reflector telescope collects light using a mirror referred to as a primary. It is concave and capturing the light, brings it to a focus. Because the light is reflected and does not pass through the glass, it is free from false colours. To bring the image to a position for the observer to view, a flat mirror is placed in the light path to deflect it.

We are having the most popular type, particularly among amateur astronomers, the SCHMIDT - CASSEGRAIN telescope which offers large aperture (8 inch diameter) in a compact portable package.
Mounting a telescope:
Telescopes are usually mounted on a tripod stand in such a way that they can be pointed to any part of the sky. There are two types of mounts:
The Azimuth mount is a one in which we can turn the telescope both up and down and sideways, independent of each other, to point to a particular a star or a planet.
In Equatorial mount, the telescope is mounted such that its axis of rotation is parallel to earth’s axis and it points to north- south direction.
With azimuth mount we have to adjust both in vertical and horizontal directions to keep our object in the field of view. With an Equatorial mount, on the other hand the adjustment can be done simply by turning the telescope westward around the equatorial axis. After renovation, the telescope is mounted on an anti-vibration peer.